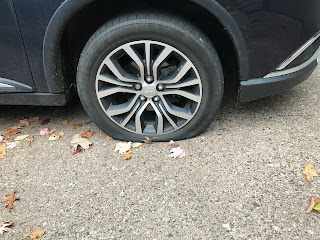 If this was an ad for a political candidate (oddly a tire) stating "Candidate Tire Has Never Been Flat And Never Will Be Flat And When I Am President No American Will Ever Have A Flat" we would have a controversy.

Twitter would not run the ad because they have decided to not run political ads, and that may extend to political commentary.

Facebook would run the ad because they believe viewers need to discern the accuracy of ads...even though the tire is obviously flat.

There was a time when changing a tire was a simple deal. Take the jack and spare out of the trunk, lift the car, take off the lug nuts and swap tires. You could do it standing up and did not even get dirty.

With today's cars there are a lot of issues; try to find the jack, the spare is like a kids toy, the spare is hidden under the car which requires you to lay on the ground, there is at least one lug nut that is 'secure' and requires another gizmo, the 'jack points' are unclear and you have to lay on the ground to find them, the lug wrench is about 10" long which is a challenge for loosening the lug nuts...honestly I think the emergency vehicle services companies pay the manufacturers to make this difficult. I can seen a business meeting where the execs say "Some people can actually change a tire with this cocked up system. We need to make it more cocked up."

It's unlikely that anyone has read this far so lets talk about candidates changing tires...

Trump: Always changes his own tires.

Warren: If there is a flat the billionaires will pay for it.

Klobucher: I'm a midwestern woman. I've changed my tires and the flat tires of some wimpy men.

Sanders: We need mass transit. I'd recycle any car with a flat tire.

Buttigieg: You think I can't change a tire?

Biden: This is America. Your neighbor will change it.

Booker: In my neighborhood someone will just steal a tire that is not flat.

Yang: With my gift everyone can hire someone to change it.

Harris: Government should take care of it and my campaign would do it up until last week in New Hampshire.

OK...enough about tires. I'm going to warm up in anticipation of laying on the ground again later today when replacing the tire when repaired. At least it's not January.
Posted by Art at 3:40 PM